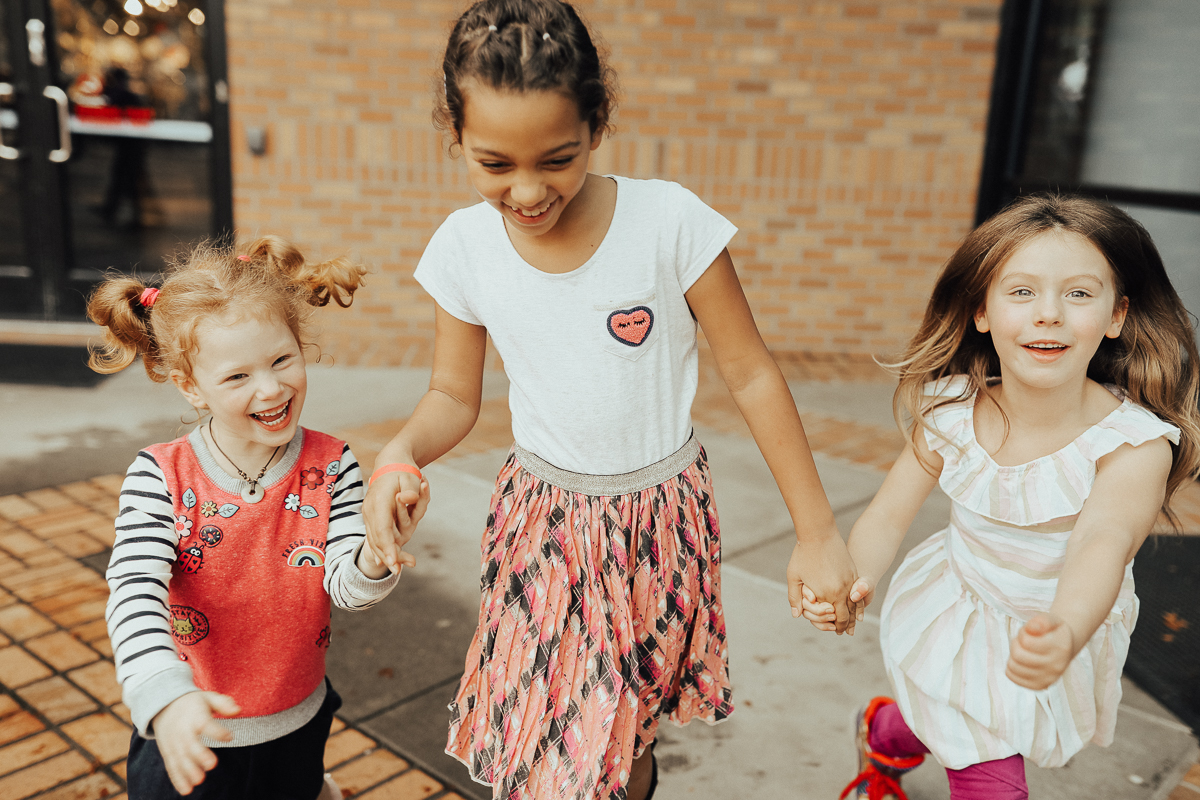 What is this Bill About?

This Bill is an attempt to mandate the full Vaccine Schedule to all children attending public, private or charter schools in the state of Oregon. It will include attendance to organized functions including Sunday Schools.

If passed, HB 3063 would remove personal belief exemptions for vaccines currently on the recommended schedule. The bill would ban access to any child aged six weeks through 12th grade from attending a licensed childcare facility, preschool, public, private or charter school, even if the child is missing just one of the more than 30 doses of vaccines. Children currently on Individualized Education Plans (IEP’s) and students with disabilities, who require additional services, would also be denied free and appropriate education if not up-to-date on all vaccines.

Why would anyone oppose this Bill?

These are some of the most common reasons why Oregonians are opposing this bill: 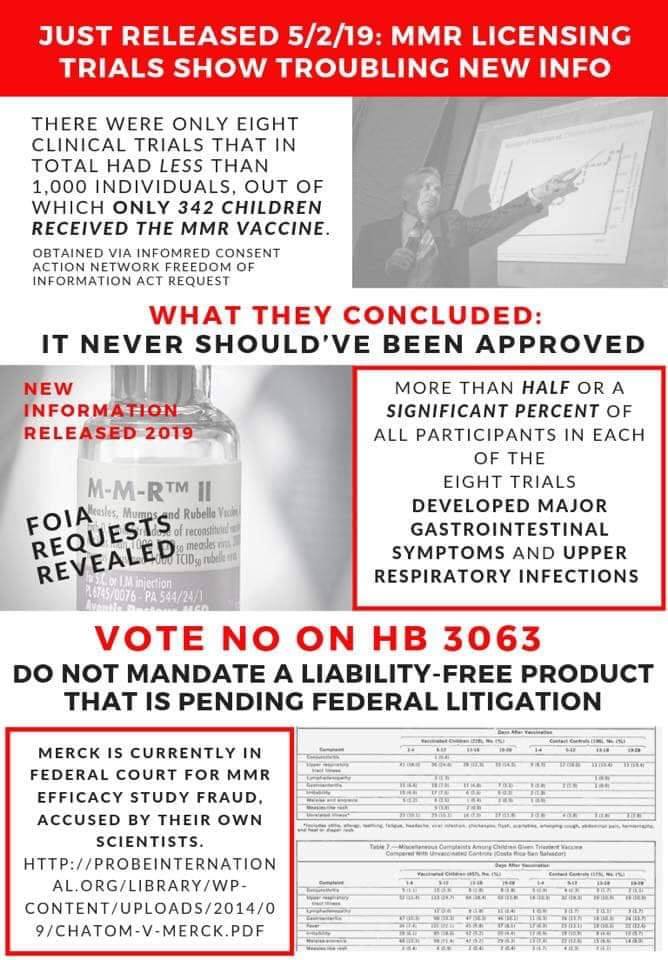 What About the Measles Epidemic?

While the unvaccinated community has been blamed for the recent measles outbreak in Oregon this winter, it is common medical knowledge that there are ongoing efficacy issues (the vaccines are not as effective as we were once led to believe), which has caused many recent outbreaks to occur and be originally caused by fully vaccinated persons. There are many other components that contribute to outbreak numbers. We have to take the rising population into account as well.

In 2018, the majority of outbreaks and high numbers was due to Orthodox Jewish communities who were traveling abroad and bringing the measles back to the states. These outbreaks crossed over into our 2019 numbers. “Three outbreaks in New York State, New York City, and New Jersey, respectively, contributed to most of the cases. Cases in those states occurred primarily among unvaccinated people in Orthodox Jewish communities. These outbreaks were associated with travelers who brought measles back from Israel, where a large outbreak is occurring. Eighty-two people brought measles to the U.S. from other countries in 2018. This is the greatest number of imported cases since measles was eliminated from the U.S. in 2000.” (CC.gov)

“Even when the vaccine takes, the protection quickly wanes, making it unrealistic to achieve the 95%-plus level of immunity in the general population thought necessary to protect public health. For example, 9% of children having two doses of the vaccine, as public health authorities now recommend, will have lost their immunity after just seven and a half years. As more time passes, more lose their immunity.” (exert from the Business Financial Post) 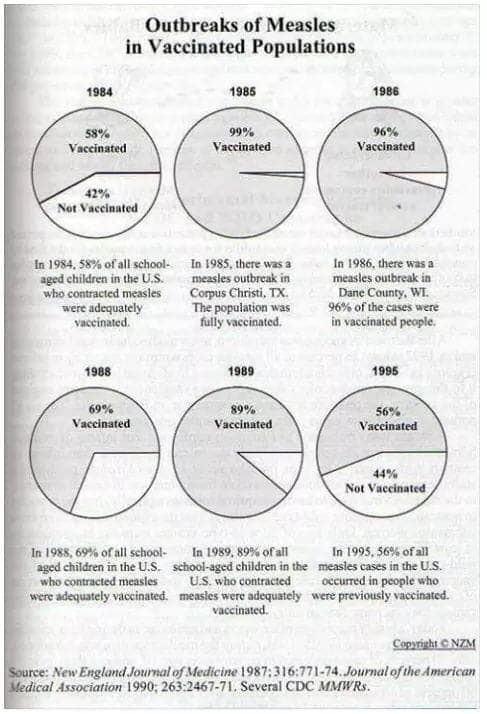 Even in 2000, the year this disease was considered fully eradicated, there had been 86 reported measles cases. In subsequent years we have seen the reported numbers go up and then back down from year to year. If the issue is truly a measles epidemic, then doing a temporary mandate of the MMR vaccine would be a more reasonable measure. However, it would still impede religious and medical freedom.

How do we protect our vaccinated kids from unvaccinated ones?

Oregon has protocols in place for outbreaks. You can find the information in section 6.1 of the Oregon.gov site.

“Exclude all un-immunized children and staff without evidence of natural immunity (including susceptible siblings of a case attending other schools). Susceptible children and staff attending school (including susceptible siblings Measles November 2018 page 12 of 17 of a case attending other schools) at the time the case was communicable should be excluded for 21 days after the last date of attendance of the last measles case. However, these individuals should be monitored for signs and symptoms of measles, and age-appropriate vaccination should be encouraged. At the health officer’s discretion, these persons can be readmitted once vaccinated. Except in health care settings, unvaccinated persons who receive their first dose of MMR vaccine within 72 hours post exposure may return to childcare, school, or work. Persons who have been exempted from measles vaccination for medical, religious, or other reasons and who do not receive MMR within 72 hours should be excluded from affected institutions in the outbreak area until 21 days after the onset of rash in the last case of measles.”

Aren’t you endangering the general public by not vaccinating your kids?

According to a recent study highlighted in the Statesman Journal, most families in the state of Oregon simply opt of one or several vaccines, rather than all of them. This means that if they have received all 30 vaccines, but opt out of one- they are registered under the “exemption list”. This is quickly sensationalized by the press as “unvaccinated”.

According to the OHA Immunization Program, for 2018, the percentage of K-12 students with a nonmedical exemption to all 22 required vaccines is only 2.6 percent.

With such a low number of fully unvaccinated, according to the herd immunity theory, this should be no threat. And I say “theory” because according to the science community, ““herd immunity” is not a scientifically validated concept, let alone one that applies definitively, predictably, or preventatively to vaccinated communities.”

A cause for concern however, is the ongoing lawsuit against Merck, the largest manufacturer for US distributed MMR vaccines. This lawsuit began with two employees of the company, both scientists, “who claim Merck defrauded the U.S. government causing it to purchase an estimated four million doses of mislabeled and misbranded MMR vaccine per year for at least a decade, and helped ignite two recent mumps outbreaks that the allegedly ineffective vaccine was intended to prevent in the first place.” (Forbes.com)

We should be looking at creating better vaccines and higher efficacy numbers if the risks are so high. Instead of blaming and targeting the very small numbers of the “not fully vaccinated” population, we should be looking more closely at examples such as this:

“In 2016, 41 students at Harvard University came down with mumps and, according to the Public Health department in Cambridge, every single one of those students had been vaccinated.” (Mercola.com)

Shouldn’t ALL kids be vaccinated?

In 2011 the Supreme Court concluded that vaccines are “Unavoidably Unsafe,” with greater risk to some persons than others.

In the last Institute of Medicine report, 135 of 155 potential vaccine adverse events did not have the science to exonerate vaccines from causing them.  Vaccines are not risk- free or “safe for everyone”. If they were, the IOM would have been able to exonerate vaccines from those adverse reactions and currently it can’t do that for 87% of the reactions that vaccines are suspected to cause. Thus, it’s the parents responsibility with the advice of a trusted doctor, to take individual information into account concerning the final schedule and timeline.

Can’t you still get medical exemptions with this bill?

If this Bill were to pass, many of the medically vulnerable will be forced to receive these vaccines, despite scientific studies and recommendations not to.

Children at high risk for adverse effects- even those listed clearly on the CDC website and manufacturers websites- will be forced to receive these vaccines according to the current outline of this bill.

Here is a list of all the medically vulnerable, who will not quality for an exemption, despite warnings on many vaccine inserts that those with suppressed immune systems may be at higher risk: 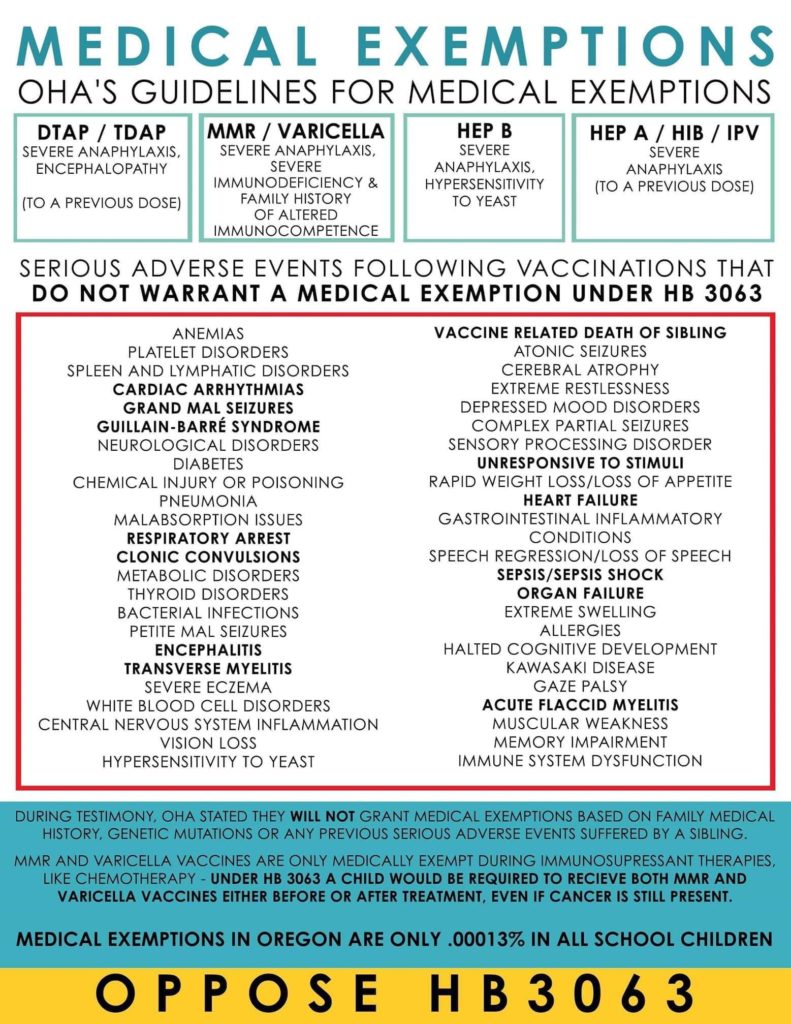 In 1970 the Institute of Medicine (IOM) of National Academy of Sciences – renamed the Health and Medicine Division – was chartered as the health arm of the NAS to provide evidence to the government and private sector that would assist in informed health decisions.

In a series of reports published over a decade, they confirmed continual evidence for adverse effects of vaccines including  chronic brain and immune system damage or death. IOM committees found a long list of health problems that are causally related to vaccination, which you can read more on and find here.

IOM published a report in 2012 revealing that there were continuing significant gaps in scientific knowledge about the biological mechanisms of vaccine injury and death, which means that there simply are not enough long term studies to understand the long term effects of these vaccines.

Additionally, there have been zero studies done on how combined vaccines such as the MMR vaccine- where they administer three different strains at once- will affect the human body and their immune system.

What are the actual risks of Vaccines?

Not all parents will be able to take the financial blow and pull their kids out of school. For those that do, there will be psychological and mental setbacks to consider:

This bill, if passed will actively promote the segregation and discrimination against a minority group. It’s my hope that we can all stand with one another and respect one another’s differences.